Although we had a spattering of classes with several people, Graffiti Tango’s predominant early up-line for salon tango came from Ernesto Carmona. This is a tango teacher that lives in Buenos Aires and was suggested to us by Denis Beauchamp, not only because of his unique pedagogic approach to teaching tango, but also because he speaks French. We brought Ernesto here three times starting in 1992. (Note: We had hoped to have a different French-speaking tango teacher here in 1994 and Pablo Veron was our choice. But he returned our calls too late and Ernesto came a third time.) The first time Ernesto came he stayed for two weeks. Danielle and I spent 4-6 hours with him during the day and then he would teach community group classes in the evening. Our teaching staff and troupe dancers participated in his group workshops free of charge, every year. In our private sessions, Ernesto appreciated that Danielle and I had strong backgrounds in professional dance; that is to say, he knew we could integrate (quickly) detailed and highly critical directions. He began with our feet that first year and worked his way up to our heads. Ernesto is an interesting and explorative pedagogue. From what I understand, his structural approach to tango was influenced by his time doing shows with Juan Carlos Copes. I have another page (Teaching tango as dance) that reflects more on pedagogy; there I’ll speak more of what Carmona brought to us.

We met Ernesto’s partner Norma Tomasi Gomez in Bs. As. in 1993. She offered us the most poignant criticism that we had on our tango dancing to date. Once in the studio with her (for the first time) she asked us to dance a tango, then a milonga, then a waltz. She only spoke after the three dances. What she said hit me like a thunderbolt and remains with me to this day! She said ‘Tango, milonga and waltz are three different dances with three different rhythms; you approach them all the same. Now, let’s get to work.’ And so we did. 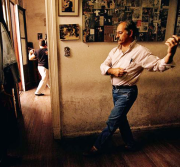 On this same trip to Bs. As. in 1993 we had a private session with Rodolfo Dinzel; it was quite an experience. The cost was such that we could only agree to one hour of work, but he kept us three hours anyway. Nice! Of note: he put us through a four-step series of exercises in improvisation that led us to strip down all that we presupposed about tango. Then he put on some classical music for the final step. We danced and danced. It was quite liberating, and that improvisation went on for about twenty minutes. I’ll never forget it. We also took a group class with Juan Carlos Copes on this trip.

He was doing some good work with a group of young people, as he has for decades. We spoke with him afterwards and (among other things) he told us that he got screwed by the Toronto producer of “A Rose for Mr. Tango”. 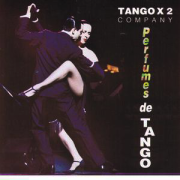 Graffiti Tango’s artistic performance vision was an amalgam of influences realized through Danielle’s and my diverse backgrounds in ballet and contemporary dance, combined with my work in theatre and my quest to pursue dance-theatre with this initiative. However in tango, a dominant inspiration for performance quality came via Milena Plebs and Miguel Angel Zotto and their work with their company Tango Por Dos. This company did not use the usual macho melodramatics of shows like Tango Argentino, Forever Tango, and others. Nor were the women made to ‘supplicate’ to the men. Plus, we could relate intimately to Milena’s professional dance training in ballet and contemporary dance. We admired very much their artistic approach bridging dance hall styles with theatrical stage techniques. Fortunately we had the opportunity to take classes (group and private) with them in Evanston Illinois, in 1995. Later that year we brought Miguel to Montreal. (He asked not to be filmed in his demo/performances with Danielle and we respected his wishes, but he didn’t miind that I filmed some of his private preparation sessions. – link to come!)

Graciela Gonzalez was a pivotal teacher for me personally. We met her in San Francisco in 1995 as Richard Powers’ tango event. At the end of the week’s classes she asked Danielle and me if she could offer us a private coaching session. (Wow!!!) We were absolutely thrilled and honoured! The first piece of music she played for us to warm-up to was a Pugliese piece that I had never heard before then: Locura Tanguero. It begins like a nightmare. I told Graciela that one day I would do a choreography to that music and send her a copy of it. This is what I sent her: (http://www.youtube.com/watch?v=iCNWk6DAAxM&list=UUPfzAAIJGhz7-oa-J13zFGw&index=20)

Later that same memorable day, and again with Graciela at the centre of what was about to unfold… we went to “Tango by the Bay”.

It was a gorgeous Saturday night event. But a bit of ‘back-track’ for a moment, if you will. The day before (Friday) the week-long event came to an end. Richard Powers approached us in the afternoon just before we were to enter a class, asking us to perform (along with all the invited teachers of the event) telling us that it was his tradition to ask the “stand-out” couple of the event to perform with the masters. We thanked him heartily for his compliment, but respectfully declined the offer to perform. We went into our class; it was a workshop on tango musicality given conjointly by Pablo Aslan and Rebecca Schulman. We were so inspired by the workshop that we returned to Richard and proposed to him that we would perform, if we could dance on Pablo’s solo bass. He agreed. And so we did. (link to come)

Back to Saturday night at Tango by the Bay where we enjoyed two ‘nova moments’. Nova moment 1 – as Danielle and I entered the premises we were approached by a small group of local San Franciscan Argentines that included the organizers of the event. They had been at the Friday performance the night before. They introduced themselves then told us that we were the only couple in the show to dance “real” tango; in that it was a total improvisation, in both dance and live music. They dismissed all the other performers saying that they had danced on those recordings a thousand times and that there was nothing new or engaging in what they did. Nova moment 2 – as the hour of the evening’s performance presentation approached, the organizer came to us to ask me to dance with Graciela. He explained to us that Eduardo Arquibau was nowhere to be found, that he had gone to a beer festival in-town that day and probably wouldn’t be in a good state to perform. I protested suggesting that Graciela dance with Carlos (a superb local tango and salsa dancer, stunningly handsome) or maybe Daniel Trenner. The organizer rejected my suggestions and insisted that I dance with Graciela. And so I did.  http://www.youtube.com/watch?v=7V1CjY313Ns&list=UURVXkyBWBL_tjsdrywAee0Q&index=6 Oh man, I was nervous and tense, but tried to appreciate the moment and my lovely partner. Graciela’s name suits her: she is a gracious woman and a graceful dancer. By the way, I use this video clip to show others and remind myself of how not to dance milonga. (good gawd, I was horrible!)

The entire week’s experience with Graciela left me with much to reflect upon in the pedagogic realm. Her class presence and material influenced me for a long time. The summer of 1995, with the Evanston and San Francisco events, was a pivotal point of inspiration for me as a pedagogue and a performer.

Jorge Torres 1993 – What inspired me most about this man is the way he moved his hips when the woman was doing molinetes around him… very sensual, yet well grounded. He moved really well. Plus I liked the fact that he started teaching tango with milonga music and milonga movement vocabulary.

Rebecca Schulman and Daniel Trenner 1994 – These two did a tremendous amount of work promoting tango via Daniel’s Bridge to the Tango and his ambition to offer the full scope of tango culture to the world. In the end, maybe it was a bit overwhelming. But they certainly helped us! Their work brought us in contact with some very interesting characters of tango. When we first met them, I immediately noticed that Rebecca was a particularly clear-headed and well-spoken dance teacher. Also, this is the couple that effectively introduced the term “milonguero style” and its subsequent dance vocabulary to innumerable studio programs in North America. Graffiti Tango immediately used this term (and one rendition of its style) for our production “Evolution”. In 1993, upon realizing our planned trip to Buenos Aires, Rebecca and Daniel suggested we go and see the work of Gustavo Navairo at the Cochabamba Street studio. We did. I’ll speak about this in a post on “Nuevo Tango”. It was also at the Cochabamba studio where we were introduced to the work of Esther and Mingo Pugliese, and saw their teen-age son Pablo dancing.

The late Andrea Missé was an adept of Milena Plebs. I first saw this couple at La Tangueria in 1996, I believe. I invited them to Montreal again, to help me train Mylène Pelletier and Mireille Painchaud for performance tango. We loved working with these two!!

Antonio and Lily – Just to set the record straight, more than anyone else I can think of this couple taught us what NOT TO DO when presenting adult-oriented social dance classes. We took one group session with these two in 1990, another in early 1991. We helped them ENORMOUSLY with the formation and launch of “Tango Nuestro”. But they chose to shut us out of the organizational/legal structure. Since we had recently escaped the machinations of scheming individuals in Winnipeg with the ‘theft’ of Danielle’s Dance Collective idea, we weren’t about to stand behind people of the same self-serving character. Tony (poor guy) and Lily are not teachers of dance. All things considered, it seems to me that Lily is simply “a sad thought that…” is just sad. If she had not gone out of her way for so many years to belittle our contributions to Montreal tango culture, I could have been kinder to her here.